Bloated feeling? Difficulties with bowel movements? Flatulence? All of these could indicate bowel issues. Our bowels form an important part of the digestive process. They take up nutrients and ensure that waste products are properly removed. While it has such an important function, it can happen that the intestines do not always perform their work perfectly. In that case, bowel issues can occur.

1 in 10 suffer from bowel issues. Bowel problems can consist of a bloated stomach, stomach ache, and flatulence. Sometimes these complaints are temporary, while sometimes something more severe is going on. For example, a combination of a swollen stomach and flatulence can indicate IBS. IBS, better known as the irritable bowel syndrome, mainly occurs in women and can cause a lot of discomfort.

On the other hand, diarrhea or constipation can also be a sign of bowel issues. These issues can have a large variety of causes. In some cases, problems with your bowel even indicate more severe disorders. In that case, hospitalization might be necessary. It thus is useful to keep an eye on bowel problems and their causes. To help you with this, you will find important information below regarding the symptoms of bowel issues, the types of disorders that exist, and what possible treatment could be.

What are bowel issues?

Bowel issues can be caused by a variety of causes. For example, stress, obesity, parasites, and even certain disorders can lead to bowel problems. Bowel issues can thus occur both because of a physical problem and be a way for psychological problems to express themselves. It is thus useful to look for the cause of the bowel problems and to treat this cause. It namely is not useful to take medication if the cause is psychological, for example.

To help you to recognize bowel issues, you can find an overview of the most common symptoms below:

Oftentimes, people with bowel issues suffer from defecation problems. These problems can come in the form of both diarrhea as well as constipation. For example, constipation is a type of issue where the fecal matter has been in the intestines for too long. This can cause hard fecal matter, which can be very painful. Diarrhea and constipation can also occur in a mixed way. What also frequently occurs is slime and blood being mixed with the stool. The fecal matter can also have a very bad smell or stick to the toilet. Sometimes you can also notice undigested food in your stool.

Another group of bowel issues consists of stomach complaints. This group entails complaints such as stomach ache, a swollen stomach, and cramps. Nausea, too, belongs to this group. People with bowel issues also often suffer from a constant stomach ache.

A third group of bowel issues entails problems regarding poor digestion. Here, complaints such as losing weight, issues sleeping, being tired, and even hair loss are included. Because of poor digestion, symptoms can be caused in different places in/on your body. Even anemia can point at bowel issues. Furthermore a lack of minerals or vitamins can also be a symptom of this disorder.

Not all complaints have to occur together. Complaints can namely differ a lot from person to person. They can even depend on the cause of the bowel issues. Furthermore, not all symptoms manifest at the same time. It can be so that some symptoms occur years apart.

What are the causes of bowel issues?

Bowel issues can have different causes. Both physical and psychological reasons can lie at the basis. Below, you will find an overview of the most important causes of these issues.

If our body weakens, chances increase of us falling ill, and thus of getting bowel issues. Immunoglobulins are such antibodies, which make it so that our body is protected. These immunoglobulins are also present in the digestive tract, meaning that if these substances reduce, chances of infections and illnesses increase.

Reduction in the natural intestinal flora?

Because of the reduction in good bacteria in our intestinal flora, your immune system is weakened. This can lead to infections coming about. You also have larger chances of falling ill.

Stress as a cause?

It can happen that there are certain types of food which are not properly digested by your intestines. An example of this is lactose-intolerance, where milk cannot be properly digested in the intestines. Such complaints can, however, occur more intense and more often. In that case, irritable bowel syndrome might be at play.

The irritable bowel syndrome is part of the group stomach-intestinal problems. In these disorders, there is a disrupted function of your intestines or stomach at play. However, there is no underlying illness known for this. We thus do not know why this disruption occurs.

Bowel issues which can occur in this disorder, can differ from person to person. Pain or stomach ache occur most often in case of IBS. Then there also are some other symptoms which can manifest in IBS:

Colitis ulcerosa is a bowel disorder, where the mucus membrane of the colon frequently is chronically inflamed. Despite the illness colitis ulcerosa being focused on the bowels, symptoms outside of the bowels can be caused as well. Other parts of the body can namely also be affected by inflammation as a consequence of the illness. Colitis ulcerosa and Crohn's disease are very similar to each other.

Just like with other problems, the illness and its bowel issues can express themselves in different ways. Colitis ulcerosa can cause large varieties of bowel issues and intensities thereof. Not everyone suffering from the illness will experience the same bowel issues. It therefore is useful to check which bowel issues are at play in your case.

Colitis ulcerosa has a large variety of bowel issues. Below, you will find a list with the most common ones. To consider the illness to be present, not all symptoms below need to be present. As mentioned earlier, the illness can namely differ a lot from person to person.

The complaints above are issues which are focused on the inflammation of the bowel. Furthermore, colitis ulcerosa can express itself at the hand of complaints in other parts of the body. Below you will find a list of complaints which can be caused by the illness:

Colitis ulcerosa causes regularly returning, chronic inflammation of the colon. Crohn's disease, on the other hand, causes a more general inflammation. Not only the colon is affected by infections, but the small intestine is also affected by inflammations. Just as in other disorders, the complaints are accompanied by ulcers and blood. These symptoms in turn can lead to other symptoms such as anemia.

Crohn's disease can furthermore cause other complaints, which are not caused by bowel issues. Vagina and bladder can namely also become irritated by inflammation. Furthermore, other parts of the body can be affected by the illness as well.

The symptoms of Crohn's disease?

Crohn's disease can be recognized at the hand of several symptoms. These symptoms are not the same in every case. They can occur in different variations and intensities. Furthermore, not all symptoms need to be present in order for Crohn's disease to be at play. The illness thus is expressed on an individual level. Below, you find a list of the most common symptoms of Crohn's disease:

Below you will find a list of symptoms which can be caused in other parts of the body at the hand of Crohn's disease:

How do I treat bowel issues?

Not all disorders and bowel issues can be treated. For example, there as of yet is no treatment for irritable bowel syndrome, IBS. However, a colonoscopy can be used to check the difference compared to other causes. While the illness and its bowel issues cannot be treated, medication does exist which can reduce the severity of the bowel issues. Sometimes, antidepressants can also help in treating bowel issues. These can mainly reduce the pain.

There are other types of bowel disorders which cannot be treated, either. Here, too, light medication can bring relief from the bowel issues and symptoms.

Except for medication, there also are other methods which help in suppressing or reducing the symptoms and pain in bowel issues.

When you eat healthily and eat nothing which can negatively affect your bowels, you can try to suppress the symptoms. For example, coffee and anything carbonated can cause bowel issues. Below you will find a list of some types of food/drinks which can cause flatulence:

Fruit generally does not cause any issues, unless your bowels are sensitive to fructose. When you eat, eat slowly and talk as little as possible during your meal. This way you avoid that air enters your body. Drink enough, too.

It has been proven that stress sometimes can lie at the basis of bowel issues or that it can worsen the problem. That is why it is useful to try to control or reduce your stress. Relaxation techniques and recognizing symptoms of stress can help you with this. You can also combine these techniques with eventual medical approaches, in order to reach a more effective treatment.

"15Minutes4Me.com" developed an online self-help program, together with doctors and psychologists, which guides you daily in reducing stress. It contains therapeutic techniques, such as relaxation exercises and breathing exercises, in order to reduce stress. Research has shown that the average participant experiences 77% less stress after one month. 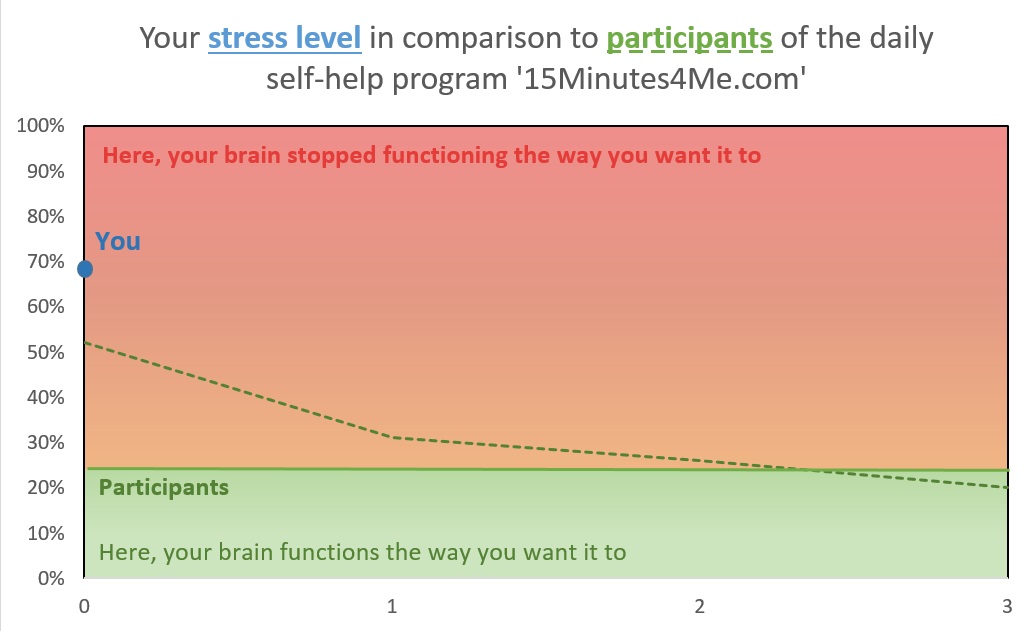 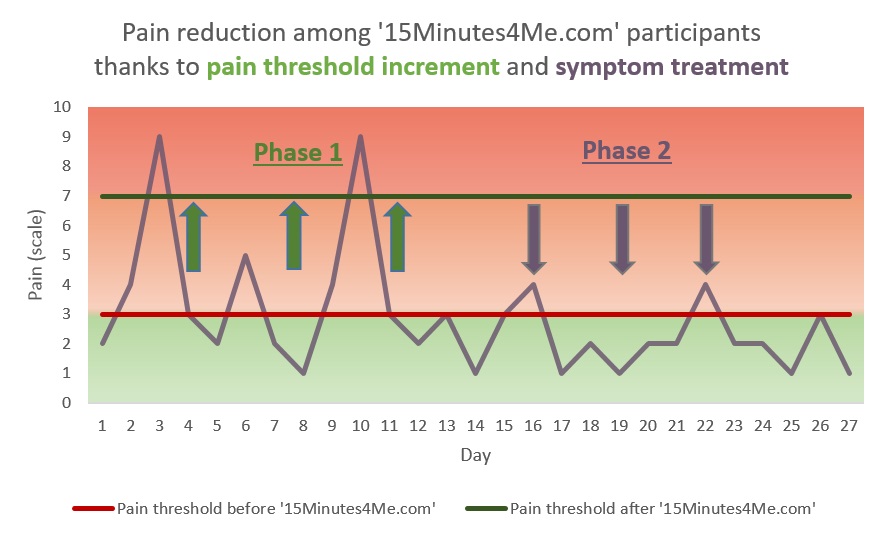 Besides minimizing pain, '15Minutes4Me.com' also helps you recognize warning signals of pain. This way, you can:

Pain is often linked with stress and other elements, that you can control yourself. Learn here how the self-help program '15Minutes4Me.com' can help you implement a balanced lifestyle and manage pain. Furthermore, the program teaches you how you can use its techniques on a long-term base in order to avoid relapse and strenghten your immune system.

Would you like to test to what extent stress can have an influence on your bowel issues? Then take the free stress test here!