Article in the Belgian newspaper "De Artsenkrant" on the 27th of September 2011 (magazine for doctors and specialists) Fifteen minutes of online self-help per day reduces stress by 77% within one month. This is shown from the first results of the research project '15Minutes4Me.com', led by Paul Koeck, MD. The life satisfaction of the participants of the eponymous online self-help program also increased by 42% after three weeks. Three years ago, the Antwerp doctor and psychotherapist Paul Koeck started a scientific study on the question: "How can we help reduce the stress in people and increase their joy in life in less than fifteen minutes per day?". He brought together an international team of doctors, psychologists, and scientists. He analyzed their most successful 'expert strategies' or 'best practices' in the healing of patients with stress-bound disorders. Examples are stress, anxiety, depression, burnout, hyperventilation, panic disorders, phobias, and addictions.

The most efficient interventions and techniques from the medical-psychological science were molded by him into a software model which consists of repetitive questions. He tested this model on its efficiency for three years via the online self-help program 15minutes4me.com. Every day he analyzed the results and altered the techniques until they had an optimal effect. This ld to results which are very promising (cfr. graph). The program does that which a therapist would do with a patient with issues. The patient looks at their behavior due to the questions. One question, for example, looks at what they were doing at the time they got their panic attack, and which factors influenced it. Or: at what point in the past 24 hours the person suffered least from hyperventilation, and what it was that helped him with this. The people in treatment also get to see relaxation exercises or instructive videos. That which is often most surprising to them is the fact that they do not know themselves that well at all.

Koeck also integrated the Australian test, the DASS-test which was developed by the University of Queensland. The goal was to be able to get measurable data from it all. The test measures three aspects: anxiety, depression, and stress. Every seven days, the patients did the test, from the month May onwards. According to the professional engineer who worked with the program, there now is a large enough amount of data to be able to get a sample based on 37 respondents. Fifteen minutes of self-help per day makes your stress decrease by 77% on average. After one week, the participants of the online research project find that their stress decreased by 27%, after 2 weeks this stress decreased by 37%, after three weeks by 54% and after five weeks the average stress reduction lies around 77%. Furthermore, choice based online self-help for fifteen minutes per day was enough to have life satisfaction increase by 42% after three weeks. This improvement was noticeable already after one week (plus 15%). "Choice based self-help helps people to gain insight into which solutions work for them and which do not", Koeck concludes. "The computer program guides them in this self-reflection which means they can make better choices and take the step to a happier life themselves. Each week the program measures your improvement via an objective stress test". By 2012, a study will be done on a larger scale. It will be interesting them to see who will get a good score and who will not. It is likely that an inverted correlation is found between the amount of time in which the problem has been present in someone and the efficiency of the treatment. 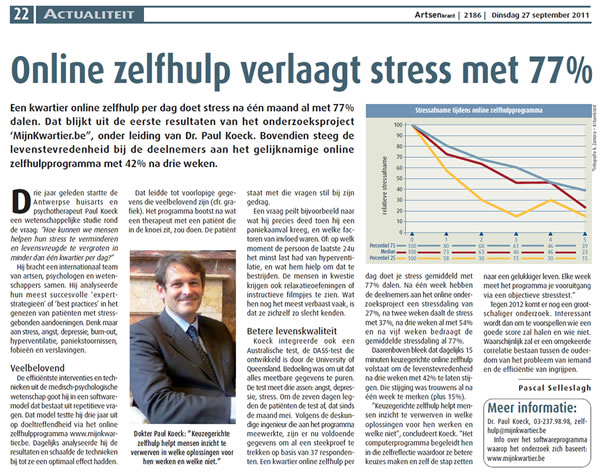