'15 Minutes 4 me' taken up in the international literature

The self-help site '15 Minutes 4 Me' (www.15Minutes4Me.com) has been present for over three years, online Positive results were recently published in the international literature.
Those who think that they are suffering from burnout, stress, anxiety, depression, tension, or hyperventilation, can take a self-test on '15 Minutes 4 Me'. Then they can sign up for the self-help program. By answering questions and taking on suggestions, the participant works on their problem. Through fifteen minutes of computer-regulated therapy per day, the average participant sees their stress reduce by over 50% after just 3 weeks time (Figure 1). By this time, theDASS-score has, on average, fallen below the stress-free zone. "What has stood out to me lately, is that taking the step toward using the internet has decreased a lot", founder PaulKoeck, MD (Antwerp) says. “When people are able to see what is and is not useful on the internet, they want to use a scientifically supported self-help program via the computer. For some, the use of '15 Minutes 4 Me' is the first step. Then, the program can tell them to consult a doctor, in case necessary. Originally we thought about only allowing people into the program after having consulted their doctor, but that would increase the steps necessary, making '15 Minutes 4 Me' lose its initial effect."

Of all those who are told by their doctor to try psychotherapy, only a few take that step, doctor Koeck knows: "In the morning I got op, and saw that someone had signed up for '15 Minutes 4 Me' that night at 4 o'clock in the morning. That is the typical profile of a patient who gets a hyperventilation attack and thinks: tomorrow I will call a doctor. Because of some reason or another, many people do not dare to take that step the next day." A reason why people do not look for help might be that they do not like to talk, while this is something which has to be done during a face-to-face consult. Some are scared that they will have to uncover their sexual abuse throughout the therapy. Furthermore, patients in centers for mental healthcare sometimes are looking at waiting lists which are several months in length. With '15 Minutes 4 Me' they can take some steps while waiting, so that their issues is partially soled by the time their consult arrives.

The step-reducing effect of self-help programs is also shown in the sexes. It is well-known: at consult psychotherapy, most patients are women. This is als true for '15 Minutes 4 Me', but there are, relatively speaking, more men who look at the program. This confirms that which Paul Koeck saw in international circles: those who make audio programs for self-help found that their instruments alter the sex-ratio for the group reached toward more men. 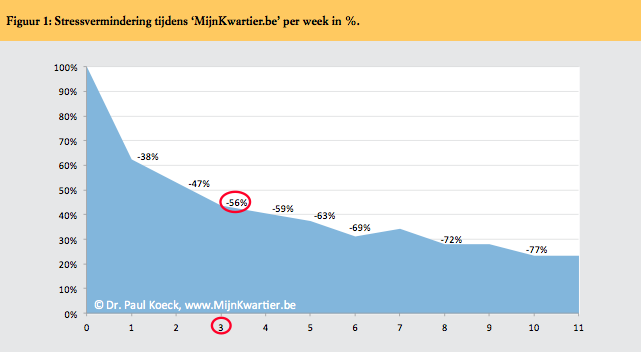 This type of confirmation leads to a clear conclusion: online self-help programs form a new therapeutic class, next to medication and conversational therapy. For example, the patient might be allowed to choose between psychotherapy and '15 Minutes 4 Me'. The one option is not always better than the other, but it might be more in accordance to the patient's preferences. "Recently I had a patient of whom I realized that conversational therapy alone would not be enough. I recommended him to test '15 Minutes 4 Me' as well", Koeck, MD, says. "One can imagine that an engineer who likes to work on his computer, feels more comfortable using an online program. But a woman who regularly talks about everything with her friends, will probably prefer conversational therapy. Self-help programs convince via a paradox: the psychological contact is stronger in those than it is with help in human form. Patients generally enter a psychological contract with the person who helps them. But with whom do you sign the contract if there is no such person? "With yourself", answers PaulKoeck. "A participant told us on our website that she had mainly built an important relationship with herself via '15 Minutes 4 Me'. The program asks questions every day which help you to reflect on your own persona. This explains why the compliance of the participants is gained via an acceptable financial contribution: once they have paid, people want to get all they can for their money. In the Netherlands, there are freely accessible sites for self-help, but only a low percentage of those who sign up actually finish the program.

Participants get the non-binding advice from '15 Minutes 4 Me' to talk about their results with their doctor, so that other options can be present in case the self-help program alone is not enough. To discuss their progress with the doctor, graphs are given by the program, which make it possible to show the patient's results really easily. "The graphs have led to new applications", Koeck, MD, says. "We see, first of all, that the doctor definitely uses this material as a tool to see how the patient is doing. But patients who are on sick leave due to their illness, also take the graphs to their control doctor. This makes it possible for some people to show their employer that they are actually working on their situation."

A similar relevance is found in the certificates of participation, which are given to the participants when they have gone through 75% of their consult sessions. When employers got these certificates, some decided to reimburse '15 Minutes 4 Me' for their employees - 55 euros per month of participation, which is a small sum for a company if this means that they can avoid someone from their team sinking into a burnout. This new way of doing things picks up in the question of the government, that companies would work to prevent burnout. The participation mainly comes from large structures, but smaller sized companies are also starting to go along with this. The study byKoeck, MD, will be published in the first issue of The international Journal of Psychosocial and Cultural Genomics, Health and Consciousness Research.
Patients can take the self-test for free on www.15Minutes4Me.com. 215 000 Flemish and Dutch participants have done so already.
Article by: Michèle Langendries, MD
Our self-test