Those who believe they suffer from burnout, stress, anxiety, depression, exhaustion, or hyperventilation, are welcome on website '15 Minutes 4 Me' (www.15minutes4me.com) for a self-help program. Earlier it has already been shown that the program causes a quick reduction in stress. Now, a follow-up study furthermore shows that the result persists in the long run.

Potential users first take a free stress-test. Afterwards, they receive a video explanation regarding the self-help program. This way, they can choose whether or not to participate.

On a daily basis, the patient responds to solution focused questions via the program, helping them to find new solutions to existing issues. Each session takes fifteen minutes. The progress of the program is adjusted by the system, based on the result from the stress test. The program subscription can be extended one month at a time.

"When it comes to that, the approach is the same as the one used by psychologists", says Paul Koeck, MD.. He is a doctor and psychotherapist with '15 Minutes 4 Me'. "The program is used for as long as the patient has a need for it".

'15 Minutes 4 Me' was founded in 2011. In 2014, Koeck, MD, could show results for the first time on the 7th Mental Health Congress, organized by the Flemish Association for Psychiatry. In a population of 1 056 patients, it appeared that the patients who originally had a high stress-score as a sample, were stress-free after an average of 21 days. The stress was measured with the DASS-21-score (Depression, Anxiety, and Stress Score). Over this same period, the life satisfaction score increased by 40%, seen through a visual analogue score (placing a cross on a line, with 0 and 10 as boundaries).

Last Tuesday, the results of the follow-up study were proposed on the 8th Mental Health Congress. Koeck, MD, studied the stress-score in 1 335 patients who had used '15 Minutes 4 Me'. That is 34% of the patients, who were contacted by e-mail to fill out both scales again. On average we see in this population that the stress-score reduces by 64% as compared to the score at the start, after participation in the self-help program. The score thus reduces to reach a normal (stress-free) level, and remains at that level for a long time after participation, up to several years (graph 1). At the same time, the life-satisfaction score stabilizes in the long run at a level of +40% as compared to the baseline score (graph 2). 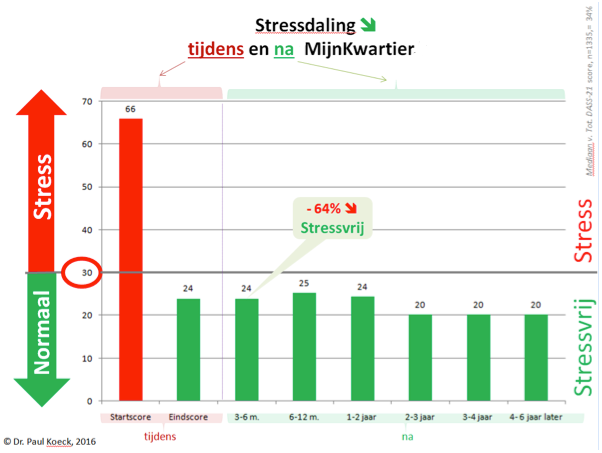 Graph 1. Stress reduction during and after '15 Minutes 4 Me'. The red bar shows the starting score. The first green bar from the left is the score by the end of the program. The scores are at that time in the stress-free zone. This remains this way in the long-run, until 6 years later. 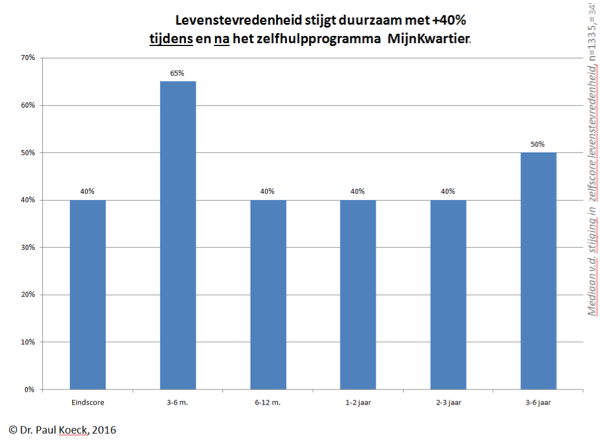 Graph 2. Life-satisfaction during and after '15 Minutes 4 Me'. The first bar from the left is the score upon finishing the program. The increase of life-satisfaction by 40% remains present in the long-run.