May = Mental health month
Try the daily program now 7 days at only $1! Complete your self-test and sign up today
Offer valid until May 30

Hay fever is a common type of allergy. If you have hay fever, you are overly sensitive to anything which has to do with grass and trees. More specifically, your allergy is triggered by the pollen which is spread by plants, trees, and grass. Hay fever is also often called pollen allergy.

What is hay fever?

Hay fever occurs when you are overly sensitive to pollen. Everyone has antibodies which make it so that we do not react to the pollen. For some people, however, the body has a defense mechanism which forms an exaggerated response to the pollen. This reaction is triggered when the pollen comes into contact with:

As a consequence of this reaction, the mucous membranes come into action. The reaction will make it so that these mucous membranes swell up. Furthermore, we start to produce more mucus, which explains the runny nose commonly associated with allergies.

What are the symptoms of hay fever?

In itself, hay fever is not a dangerous illness and it does not usually cause any lasting damage. Hay fever is mainly an illness which is seen as annoying, especially during summer and spring. Furthermore, hay fever can carry certain complaints with it. Below, you will find a list of the complaints which can occur in case of hay fever:

Hay fever also often occurs together with other illnesses, such as eczema for example. Asthma, too, is something which often occurs in combination with hay fever.

Hay fever occurs during spring and summer, when plants and similar growths are blossoming. It can occur that some people suffer from hay fever on a daily basis, while others only experience hay fever once in a while.

A sensitivity to hay fever is present from a young age onward, even at birth. Yet, hay fever complaints are not expressed right away in most cases, but rather only after a few years. Hay fever and its symptoms can then also reduce again, but when this occurs depends on the person.

It is difficult to know what it is that causes hay fever. We see that a predisposition for hay fever is present from birth, yet complaints are not always triggered at the same age. It therefore is difficult to determine what exactly it is that triggers the hay fever. What we do see is that hay fever occurs more commonly when another family member also suffers from it. A genetic cause of hay fever is therefore not to be ruled out.

Furthermore, it is also expressed that we suffer more from hay fever when our immune system is weaker. Because we have fever defense mechanisms, the pollen has a larger effect. Illness and stress make it so that our immune system can weaken. Even stress caused by the prospect of constant sneezing can increase chances of a sneezing pit occurring. It thus is useful to also consider these factors.

It, first of all, is useful to look for a diagnosis hay fever, so that suitable treatment can be prescribed. There are different ways in which to treat allergies and hay fever, of which the effect differs from person to person.

What we often see is that people try to prevent attacks by taking medication. There namely are ways to strengthen your body and to eliminate other possible causes. "15Minutes4Me.com" is an online program which was developed by doctors and psychologists with the goal of letting people work on different aspects of illnesses and allergies. By reducing stress, it helps you helps you to strengthen your immune system and to increase your pain threshold. Furthermore, the program helps you to recognize warning signals, so that you can: 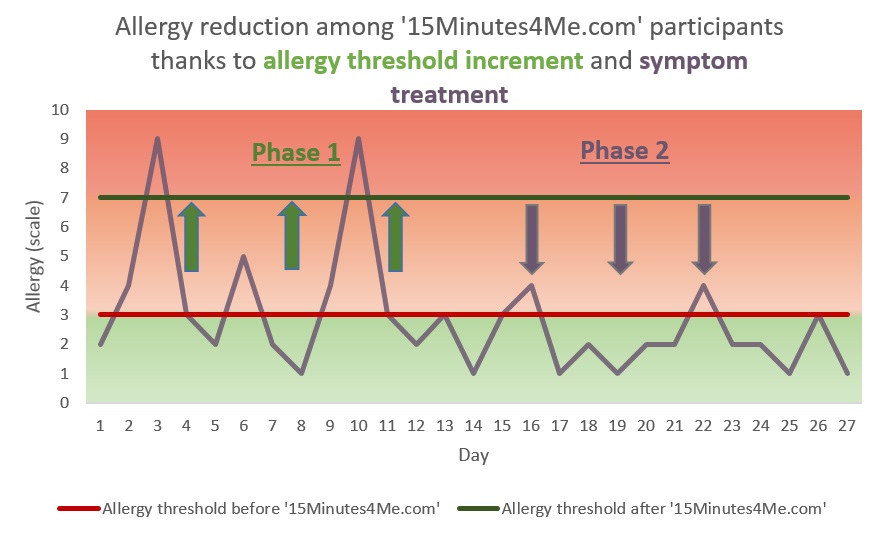 Would you like to test which causes could have an influence on your hay fever? Then take the free allergy test here!